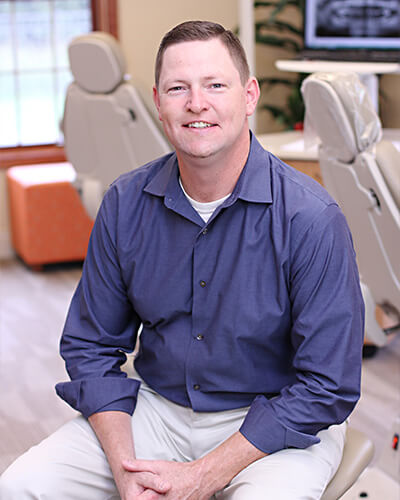 Dr. Patrick G. Jones, more commonly known as “Dr. Pat” to patients (and occasionally, “Dr. P-Diddy Jones” to fellow staff), is a Chicagoland native and a graduate of St. Rita High School. It was there that he discovered his ability to kick field goals for his football team, while still maintaining his GPA for National Honor Society in between plays. Dr. Pat went on to graduate from University of Illinois in Urbana, with a bachelor’s degree in Biology in 1991. Four years later, he graduated from the University of Tennessee College of Dentistry and received The United States Army’s Health Professions Scholarship. Associated Orthodontists is proud to say that Dr. Pat served in the U.S. Army from 1995 to 2003! During his service, he opened his own dental practice and provided comprehensive dental care and orthodontics for nine years. He returned to school for orthodontic specialty training from Jacksonville University and was the president of his class. He is a natural leader and, as such, has received many honors in both college and dental school! Associated Orthodontists was happy to welcome Dr. Pat in 2010 as a part of our team. But being an orthodontist is only a small part of his very busy life! To this day, he is an active member of the American Dental Association, the American Association of Orthodontists, the Midwest Society of Orthodontists, the Illinois Society of Orthodontists, the Illinois State Dental Society, the Will County Dental Society, and the Chicago Dental Society. You go, Dr. P-Diddy! Dr. Pat’s family life is just as active as his professional life. He and his wife Kathy settled in New Lenox in 1998 and have four sons: Nick, Tyler, Billy and Danny. There is never a dull moment in the Jones household. In his free time, he enjoys taking the family out for fishing trips. In fact, anything that has to do with water sports has them ready to dive in. Dr. Pat’s other passion is coaching little league baseball and basketball in the New Lenox community. But do not get him wrong . . .  even with four sons, Dr. Jones still has a soft side. He likes to think his secret talent is being a dog whisperer, so we can only guess how often he is caught talking to his dogs, Hollie and Ginger (baby voice included).