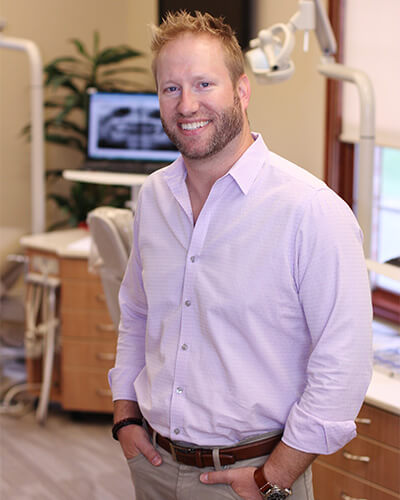 Dr. Scott Soderquist, better known as “Dr. Scott,” was born and raised in Bolingbrook, IL. These days, he and his wife, Angela, live in Naperville with their three kids Nathan, Ella, and Olivia and their dog, Daisy. Dr. Scott graduated from Bolingbrook High School in 1993, lettering in football, baseball and wrestling, with Academic All-American honors in the first. He then continued school and graduated in 1997 from Illinois Wesleyan University with a Bachelor of Arts degree in Biology. In 2001, he obtained his Doctorate with honors from the University of Illinois and graduated third in his class. While at UIC, Dr. Scott received multiple academic achievements, including Top Third Year Dental Student by the Illinois State Dental Society. He continued to the University of Illinois and completed a three-year orthodontic residency to obtain a master’s in Oral Science. He then published his master’s thesis in the American Journal of Orthodontics after graduating from UIC and has co-authored other articles as well. Do not let his baby face fool you . . . he is full of knowledge. In 2004, Dr. Scott joined Associated Orthodontists and still maintains an active membership at the American Dental Association, Illinois State Dental Society, Will County Dental Society, American Association of Orthodontists, Chicago Dental Society and is a part of the American Cleft Palate Craniofacial Association. He is currently President-Elect of the Will County Dental Society, a delegate of the Illinois Dental Society and an editorial board member of the Orthodontic Practice US. Dr. Scott is a certified Damon® System educator. He knows this system so well that he is president of the Midwest Damon Study Club. Yet, even with all this responsibility, he still manages to make time for his community by volunteering at the Will-Grundy Medical Center, Plainfield Central High School Career Day and the Give Kids a Smile program. When his busy life loosens up, Dr. Scott loves riding his ATV’s and snowmobiling with his family. Watching “Da Bears” and Blackhawks is a must for him. You might even find him sneaking in a game of Rock Band or Guitar Hero here and there.